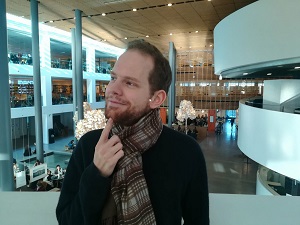 My time as a visiting researcher at the CfS in wonderful, wonderful Copenhagen is almost at an end. I was here with my family on a six-months postdoc research grant provided by the DAAD – and not only have we enjoyed our sojourn immensely, I also feel that I’ve managed to make a lot of headway on my philosophical projects, the gist of which I will outline below.

My main work (the project which won me the funding) centres around the notion of object-hood (Gegenständlichkeit) in phenomenology, especially in Husserl, although Heidegger, Sartre and Blumenberg also loom large on my theoretical horizon. Already at a first glance it is obvious that Husserl employs several different object-concepts, among them a logical, an existential and an intentional one (cf. Keiling 2010, 114, Erhard 2014, 132). According to the logical perspective an object is simply the “subject of possible true predications” (Husserl 1976, 15); this characterisation is basically in line with the Fregean and Russellian ones. The existential notion of object-hood equates objects with entities. According to the intentional perspective however an object is essentially an intentum, i.e. the non-subjective pole of an intentional act. This corresponds to the literal meaning of “obiectum” as that which is thrown against or towards us, from Latin “ob-icio”. The very etymology of “object” therefore implies a correlation of object and subject: something is an object insofar as it is – in some way – towards or for a subject (Figal 2006, 126). During my stay at the Center I have worked mainly on three clusters of problems concerning object-hood:

a) What is the relation between the different concepts of object-hood? Are they co-extensional or subsets or even contradictory? Given that Husserl both posits objects which can exist without us ever thinking about them as well as pointing out the necessary relation between subjectivity and objectivity, how should we frame his transcendental idealism in terms of objectuality?

b) How do we constitute objects? Husserl distinguishes several levels of objectification, but are there formal and genetic structures necessary to all acts of object-constitution whatsoever? Since any object is an identity-pole, object-hood requires acts which establish unity and identity proper, the constitution of objects requires a minimal form of foundation (Stiftung), which translates to a minimal form of habit. – This allowed me to transition smoothly to the topic of my talk at the BSHP’s annual conference in Durham: habitualisation. More precisely, I spoke on the inauthenticity of habits as Husserl explicates it under the heading of “mechanisation” or “technisation” (Husserl 1976, 45, Husserl 1974, 7, and Husserl 2014, 436).

c) What is not an object? For example, how should we deal with Husserl’s claim that the core of transcendental subjectivity is no “Gegenstand” but the un-objectifiable “Urstand” (Husserl 2001, 277)? – This lead me to my third major topic, namely the absolute in Husserl’s phenomenology, which forms the central theme to a contribution of mine to a volume on ways of approaching the absolute, under preparation in Heidelberg. The core questions here amount to the following: if the absolute ur-I is not an object, how can this assertion be true, if anything is an object, as soon as it is the subject of a true predication (or the intentum of even a deictic reference like “it”)? And if phenomenology thematises its topics and thematisation is objectification, how could the absolute as a non-object be a topic for phenomenology? And how can we even say all this (including this very sentence) with any reasonable evidence if the absolute supposedly withdraws from thematisation and reflection? These questions in turn overlap with my work for the DFG-research group on phenomenological metaphysics.

I won’t spoil anything here, as work is still in progress on these matters. I’d rather like to close with a few comments on life at the Center itself. Everyone working there is not just talented, bright and enthusiastic about their work, but also welcoming, kind, helpful and open to discussions about almost anything. And this itself is remarkable. In a world which feels like it is falling apart due to the greed and power-hunger of the few and the nationalistic stupidity and stubbornness of the many, us academics seem to get along surprisingly well. At the Center scholars from China, Russia, the US, Canada, Germany, to name just a few of the nations currently ill at ease with each other, work (and lunch and drink and bowl) companionably alongside each or engage in conversations – all in a spirit of inquiry, empathy and interest. I know similar good things are happening all across the world, but I think it might be a good idea to remind ourselves from time to time that fruitful rational exchanges and international cooperation are taking place daily alongside all the hate-filled shouting and sabre-rattling. And maybe showing that and how these critical but deeply civilised engagements are possible, is one task we philosophers (and other academics) should take more seriously.