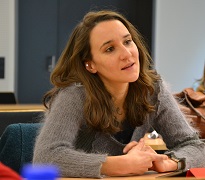 Some three months have passed since I left beautiful Copenhagen and the lively research atmosphere at the Center for Subjectivity Research. In the meanwhile a couple of newsletters indirectly reminded me of my promise and my wish to write a short contribution for the blog. Today might finally be the right day, not only because I have some more time between one seminar and the next, but also because, after some reworking, I have finally labeled the paper I wrote during my stay at the Center as ‘final version’. While revising it, I became more and more aware of how much I profited from the discussions and exchanges I had with colleagues at the Center.

My main question in this paper (entitled Experiencing Reality and Fiction: Discontinuity and Permeability) concerns our participation in the experience of fiction. I understand ‘fiction’ here in a rather large sense, including playing a game of make-believe, being the spectator of a theatre pièce, reading a novel, etc. As I hope to make clear in the paper, what all these experiences have in common is that they are grounded in a specific kind of imaginative experience, which Husserl called ‘perceptual’ or ‘bound’ phantasy.

The questions concerning our participation in fictional worlds can be understood in relation to the different attitudes we take with respect to fictional entities and stories. In the paper, I mostly concentrate on what has been called a ‘double belief attitude’ and on the modification of our emotions and desires. The ‘double belief attitude’ can be clarified if we consider what happens in a game of make-believe, say when a child pretends to comfort her crying doll/child. Her behavior seems to indicate that she has two conflicting belief-attitudes in this situation: on the one hand, she acts as if she believes that she is interacting with a crying baby, for instance while comforting it; on the other hand, her behavior shows that she does not really believe that this is the case, for instance she dissimulates her own voice and pretend that it is the doll who is crying. How should we understand this situation? The problems related to fictional emotions are more complex, and my focus in the paper is only on what has been transmitted as the ‘paradox of fictional emotions’. Since Redford’s 1975 seminal paper – How can we be moved by the fate of Anna Karenina? – this ‘paradox’ (which is actually only apparently a paradox) has been largely debated in the literature on fiction. Can we really say that we have a genuine emotion, e.g., genuine pity, for someone we assume not to exist at all? And if yes, is this still a rational emotion?

My suggestion is that Husserl’s phenomenology of imagination, and notably of bound phantasy, offers us some fruitful resources to investigate both phenomena. Thereby – and these, as it becomes clear from the title, are the main points I wish to make in this paper – it allow us (1) to avoid the problematic implications of an account of fiction that puts too much emphasis on the ‘ambiguity’ of the real and the imaginary, and (2) to account, against a strong dualistic separation, for both the influences that our sense for what is real has on our shaping and experiencing fictional contexts, and for the influences that our experience of fiction has on the shaping of our sense for reality. I call this second aspect ‘permeability’, and I maintain that both discontinuity and permeability are constitutive of our experience of fiction.

This general claim can be more concretely explained if we reassess the two puzzles concerning different attitudes toward fiction I mentioned above. In general terms, the phenomenology of bound phantasy shows us the following:

(i) Perceptual objects can lend themselves to a double apprehension. The same doll is experienced as the doll I am playing with (in the real world) and as my little child (in the phantasy world); in Orson Welles’ Othello, we can ‘see’ the same person as Othello and as Orson Welles.

(ii) Due not only to their ‘materiality’ but also to their being intersubjectively identifiable, mostly through language and a story we share with others and with the author of the fiction, fictional objects also have their own objectivity and even quasi-reality.

(iii) The shift from one way of looking at an object to the other corresponds to the shift of my subjective experience with respect to the fictional world: I can either participate in it, as it were, from within, or rather distance myself from it. Given the ‘concordance’ structure of perceptual experience, even when I am most strongly participating in the fictional context, quasi-identified with someone that is part of that world, there will be something in my (foreground or background) experience, which makes me aware of the difference between what is real and what is imaginary. In other words, the discontinuity between the two words is maintained.

This shift of subjective participation is what underlies both the ‘double belief attitude’ and the modalization of our emotions and desires in fiction or about what happens in the fiction. Thus, we can express our belief attitude about the fiction while stepping outside of it, for instance when the child tells her mom: “(In the game I was playing), Leila was crying because she is afraid of the dark”. Otherwise, we can express our (quasi) belief in the fiction, for instance, the (quasi) belief in the fact that the ‘child/doll’ is afraid implied when the child says to it something like: “Oh little Leila, don’t cry, mama is here with you”. Importantly enough, the two attitudes are not mixed, but they do interact with each other. In the experience of fiction we never fully ‘subscribe’ to our belief ‘in’ the phantasy (it remains a quasi-belief); and yet, that experience is influenced and has itself an impact on how we make sense of reality. It is influenced because our pre-knowledge of what is real contributes to the shaping of many aspects of the fictional world (e.g., if we didn’t know that darkness can really be scary, we wouldn’t think that the ‘child/doll’ can be afraid of darkness). Yet, it also influences our real experiences and real beliefs. Take, to make another example, the case of an actor who characteristically or emblematically plays a particular role. Even if we do not believe in the existence of the fictional character, we often come to attribute to the actor as a real person some of the character traits that were actually proper to the fictional role (one rather paradigmatic example is, in my view, Chaplin’s Charlot).

The questions raised by the (apparent) paradox of fictional emotions are somehow more difficult. Yet, I believe that a phenomenological inquiry into the plurality of attitudes can allow us to shed light on it as well. This contribution is, as I try to argue more extensively in the paper, twofold. On the one hand, it is based on the idea of a ‘pure representation’ [reine Vorstellung], which Husserl already introduced in the Logical Investigations, namely of a representation considered independently of the doxastic modality of belief. There is no need to consider our pity for Anna Karenina as either not-genuine or irrational. That emotion is fully justified if we consider how her destiny is portrayed. What awakens our feelings and emotions is what pertains to the mere representation of an object, a person, or a story – independently of our belief in their existence. On the other hand, however, our emotional reactions are also modified once the changes in the belief attitude come into play. And again, we can experience pity ‘as if’ we were part of the fictional world of Anna Karenina, or we can experience pity as someone who is not participating in this world. In both cases, and despite the qualitative differences, our emotions remain genuine and rational.

Discontinuity should be maintained here too: I never fully identify myself with someone that belongs to the world of Anna Karenina. Yet, two-way permeability should be recognized here as well, not only because my emotional reactions are always influenced from my being the kind of person (with certain inclinations, sensibility or lack of sensibility, etc.) I really am (thus permeability here is in the direction that goes from the real to the imaginary), but also the other way around, since my emotional experience in and about what happens in a fictional world may then impinge on how I emotionally and evaluatively grasp what is real.

Now, all this, even in the more extensive form it assumes in the paper, probably raises at least as many questions as it (hopefully) contributes to clarify. Yet, philosophical questioning not only means that there are more and more problems to be addressed, but also – and hopefully especially in this case – that there will be other occasions to prolong the conversation with those who have contributed in making one aware of these problems.