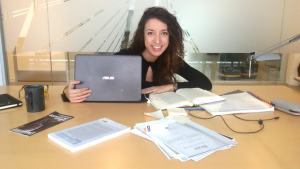 In his effort to keep a “Diary of a Body”, Daniel Pennac defined this peculiar description as «(…) not a treatise on physiology, but my secret garden, which is in many ways our most shared territory» (Pennac 2012, 13). A shared territory continuously exposed to the gaze of others, and at the same time a performative dimension that allows us to pay attention to the world, while becoming almost transparent in experience. How do I move in the environment without explicit attention to my movements? How do I get to catch the joy in your smile? And how is it possible for us even to interact prior to any linguistic communication? Thanks to a pre-reflective embodied dimension, our experience tells us that “mind-reading” is in most cases not needed. However, if our body is the very source of empathic grasping of basic emotions and intentions through expressions and movements, we need first of all to investigate the terms of embodiment. In order to ground my PhD thesis about empathy on a solid basis, I decided to focus on the phenomenological concept of Leib and on the debate concerning the body schema and body image. The Center for Subjectivity Research has been the perfect place to learn more about the topic and to discuss it in an international and open-minded environment.

Avoiding a bike while we walk, pressing the handle of our office’s door, grasping a glass of wine while meditating on Kierkegaard’s Enten-Eller: for most daily actions an explicit attention to our visual image of the body is not necessary, nor do we need to focus on our muscles’ movements. The body schema, that is the pre-reflective dimension which includes proprioception, posture and localization, enables us to focus mainly e.g. on cognitive tasks or on the world. Differently, making our body become an object of observation, reflection or emotional directedness corresponds to an exit from the condition of “transparency” described before: this is what can be defined as body image. Yet, the distinction between the two dimensions is not always clear-cut, due to a partial overlapping of the two in experience and, above all, to the conceptual confusion in the literature among the fields of neurosciences, psychiatry, and phenomenology.

Starting from the end of 19th century, the concept was used to indicate bodily posture and localization by comparison to pathological conditions, or as a neural map of the body (therefore subpersonal), or again as a structure that enables to experience a sense of bodily unit. Besides, the terms “body schema” and “body image” have been sometimes used as synonyms, thus complicating the issue. Both in the past and present debates, the different definitions in the various fields bring about so many ambiguities that it has been even proposed by some scholars to eliminate the two terms, a tabula rasa that would allow for new unambiguous expressions to define experience or specific neural activations. I posed myself two questions in examining those impasses in the literature: a) is there a differentiation between the two, in normal and pathological experience?; b) is the body schema unconscious, subpersonal, pre-noetic or reflective? With the purpose of clarifying the primary experiential dimension of embodiment without falling back into ambiguities, I explored Max Scheler’s characterization of a Leibschema, and investigated if a differentiation between body schema and body image was already present in his phenomenology.

Since he introduced the distinction between Leib and Körper in his phenomenology (The Idols of Self-knowledge, 1912), Scheler wrote about the Leib as a unity that doesn’t need to be learnt: there is a structure that is present prior to both external and internal perception, and is even the condition for them. Although the precise term will be used for the first time in his Formalismus, a sketch of the experiential importance of the body schema can be traced back to the Idols, where he describes normal volition as the direct aiming at the realization of an action, through quasi-automatic impulses, insofar as we meet no obstacle on our path. That means, for instance, that when we close a door we are focused on the handle and not on our body, of which we usually have only pre-reflective consciousness while accomplishing a task. On the contrary, a pathological experience would explicitly focus on the body instead of the purpose. If we apply a more recent case to Scheler’s theory, this becomes particularly evident in the sensory neuropathy of Ian Waterman, that compels him to rely on his visual image of the body or on imagination to accomplish daily movements and gestures (Cole 1995).

The bodily structure that allowed him to move with no need for cognitive effort, i.e. the body schema, has been severely impaired. From a Schelerian point of view, this appears even clearer in the Formalismus, where he writes that when automatisms like the ones described are performed deliberately and require explicit attention, they become disturbed and ill. We could express it in other words, by saying that an abnormal condition arises when we use the body image in situations where the simple body schema would have been sufficient. It is indeed in this text that the German phenomenologist uses for the first time the phrase “das Schema unseres Leibes” (GW II, 409). The Leibschema is regarded as a pre-condition for any sensory activity or datum, a sort of lens through which we pre-noetically filter information from the milieu. This means that, in a frame of value-ception (Wertnehmen), what we encounter in the world is pre-reflectively selected by the lived-body structure, and the object or situation that we encounter will be perceived with such and such value that can be meaningful, useful or damaging from the “vital” perspective. The first level of individuation of a person is the way she actively interacts with her milieu, and it denotes her impulsive structure (Triebstruktur), the basic axiological orientation, interests and rules of preferences, while the sensorial data depend on the same habitual Triebstruktur that responds in a certain way to the affordances coming from the world.

I found useful evidence about a differentiation between body schema and body image in Scheler’s works, a distinction that avoids the ambiguity of subpersonal and pre-reflective levels in experience and that clarifies the concepts in a way that we don’t need to eliminate the terms examined. My research has materialized into a paper I have written on the topic for a Scheler Colloquium in Maynooth (17th-19th November).

Most of all, I am grateful to all the brilliant scholars (and friends) that I have met at the CFS, who gave interested feedback and criticism to my paper and provided many hints for my thesis. I’ve learnt a lot from all of them. Thanks to all the people that made my stay at the CFS so intellectually vibrant and hygge!