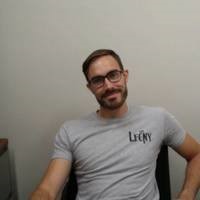 From 18 to 28 February 2019 I enjoyed a productive and inspiring visit at the Center for Subjectivity Research, supported by research funding from the German Academic Exchange Service and a Graduate Student Support Grant from Fordham University. Spring even came early in Copenhagen this year, perhaps as partial compensation for the dreary winter I spent here in 2016.

The objective of my present research is to develop a phenomenological philosophy of language. I draw on the resources offered by the phenomenological tradition (especially Husserl, Heidegger, and Merleau-Ponty), as well as recent work in the language sciences (especially neurolinguistics and language acquisition studies).

How should we begin the phenomenology of language? And what is unique about a distinctively phenomenological approach to language within the vast landscape of philosophical and scientific research on the topic? My proposal is a simple one, albeit one that has largely remained unexplored within the phenomenological tradition: I focus on language as a perceived phenomenon and apply to speech perception the resources that phenomenologists have developed to describe perception more generally. Specifically, I propose that the phenomenological notion of the horizon, developed primarily to elaborate the experience of spatiotemporal perceptual objects, can also be applied to the perception of speech. To what extent does perceiving and interacting with speech exhibit a horizonal structure analogous to that of perceiving and interacting with other objects of perception? Taking up an ancient analogy, I propose that perceiving speech has a horizonal quality similar to that of operating with a tool.

The horizon is a broad and fecund notion within phenomenology. Loosely speaking, a horizon is the network of implicated possibilities that structure my experience of an object. Horizons are formed through past interactions with things, which lay down habitual associations and expectations that in turn inform present experience and our anticipations of the future course of experience of an object. Because of my past experience and sensorimotor familiarity with hockey sticks, I have certain expectations about the kinds of things I can do with a hockey stick: the way it will fit into my hands, the way it will interact with pucks and ice, the way it will afford certain kinds of activities. When I merely stare at the stick as it sits in the corner of my office, these references to associated equipment and activities are dimly outlined as empty possibilities in the horizon of the stick. By contrast, when I lace up my skates and hit the ice, I put the stick to work in order to make actual some particular horizonal possibilities. In doing so, the stick itself is no longer the object of my perceptual attention. Rather, it vanishes into the background in order to facilitate actualizing what was previously a mere horizonal possibility.

I suggest that something analogous happens with speech perception. Because of my familiarity with them, words direct me towards some associated references. Indeed, recent neurolinguistic research indicates that language processing for verbs for bodily actions and nouns referring to graspable objects somatotopically activate the associated sensorimotor brain regions associated with the related actions. That is, hearing “hockey stick” activates sensorimotor regions that would be activated if I were to actually use, perceive, or imagine a hockey stick. Hockey sticks, we might say, are referred to within the horizon of the term “hockey stick” in much the way that pucks, ice, and playing hockey are referred to within the horizon of actual hockey sticks. And just as in playing hockey, I am so thoroughly immersed in the game that I am not at all focused on the stick in my hand, so too in perceiving speech, I am so focused on what we are talking about that I hardly pay attention to the perceived words at all.

If this account is phenomenologically and empirically on the right track, it suggests a deep continuity between perception and action involving things, on the one hand, and language processing. This finding will be of interest to advocates of 4E approaches to cognition.

Presenting this material to the research group at CfS has opened horizons for further research. It has been brought to my attention that the role of intersubjectivity in speech perception remains underdeveloped in my account. This will be a topic for future research, possibly in collaboration with CfS members.

The current work on horizons of speech concludes my doctoral studies. I hope to publish an article on the topic soon. Having submitted a complete draft of my dissertation, I will travel to India at the end of March to deepen my studies in yoga, meditation, and Indian philosophy.