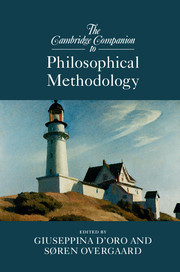 As promised in a previous blog post, The Cambridge Companion to Philosophical Methodology has now been published!

Co-edited by Giuseppina D’Oro (Keele University) and myself, the book offers clear and comprehensive coverage of the main methodological debates and approaches within philosophy. The chapters in this volume approach the question of how to do philosophy from a wide range of perspectives, including conceptual analysis, critical theory, deconstruction, experimental philosophy, hermeneutics, Kantianism, methodological naturalism, pragmatism and, last but not least, phenomenology.

They chapters in Part I explore general conceptions of philosophy, centred on the question of what the point of philosophising might be. Part II focusses on the method of conceptual analysis and its recent naturalistic critics and competitors. In Part III, a variety of methodological views that belong neither to the mainstream of analytic philosophy, nor to continental philosophy as commonly conceived, are presented and discussed. Finally, Part IV is devoted to perspectives from continental philosophy. Together, the twenty chapters in this book will enable readers to grasp an unusually wide range of approaches to methodological debates in philosophy.