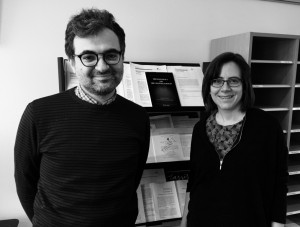 This paper is the result of a very productive ongoing collaboration that started during Alessandro’s postdoc period at the Center for Subjectivity Research. For a while we kept coming back to discussing informally an example that is central to Max Scheler’s analysis of shame in Über Scham und Schamgefühl. At one point, Scheler confesses that listening to certain “dubious” stories (does he mean sexually explicit?) in the company only of men doesn’t make him blush, but he does feel ashamed when he hears another man tell such stories in the presence of a young lady—even if neither the lady nor anyone else in the room shows any signs of shame. This example of feeling ashamed of an action one didn’t perform or contribute to seems to run counter the standard characterization of shame as a self-conscious emotion, i.e., an emotion whose intentional object is the very subject who feels it. And it cannot be explained by emotional contagion, Scheler argues, because in his example, he is the only one feeling shame. Such situations are indeed quite frequent. How to make sense of them?

In our conversations, Alessandro and I found Scheler’s solution of extending the intentional object of shame to “the individual self in general” quite unconvincing. But might there not be something else going on here? Couldn’t we relate these feelings to group identification? And wasn’t this a productive place to bring together our own areas of expertise to explore the connections between self-conscious emotions, group identification and the social self?

Self-conscious emotions such as shame and pride are emotions that typically focus on the self of the person who feels them. In other words, the intentional object of these emotions is assumed to be the subject that experiences them. Many reasons speak in its favor and yet this account seems to leave a question open: how to cash out those cases in which one genuinely feels ashamed or proud of what someone else does? This paper contends that such cases do not necessarily challenge the idea that shame and pride are about the emoting subject. Rather, we claim that some of the most paradigmatic scenarios of shame and pride induced by others can be accommodated by taking seriously the consideration that, in such cases, the subject “group-identifies” with the other. This is the idea that, in feeling these forms of shame or pride, the subject is conceiving of herself as a member of the same group as the subject acting shamefully or in an admirable way. In other words, these peculiar emotive responses are elicited in the subject insofar as, and to the extent that, she is (or sees herself as being) a member of a group – the group to which those who act shamefully or admirably also belong. By looking into the way in which the notion of group identification can allow for an account of hetero-induced shame and pride, this paper attempts to achieve a sort of mutual enlightenment that brings to light not only an important and generally neglected form of self-conscious emotions, but also relevant features of group identification. In particular, it generates evidence for the idea that group identification is a psychological process that the subject does not have to carry out intentionally in the sense that it is not necessarily triggered by the subject’s conative states like desires or intentions.